A Reflection on PitBulls, and the Stigma They Often Face 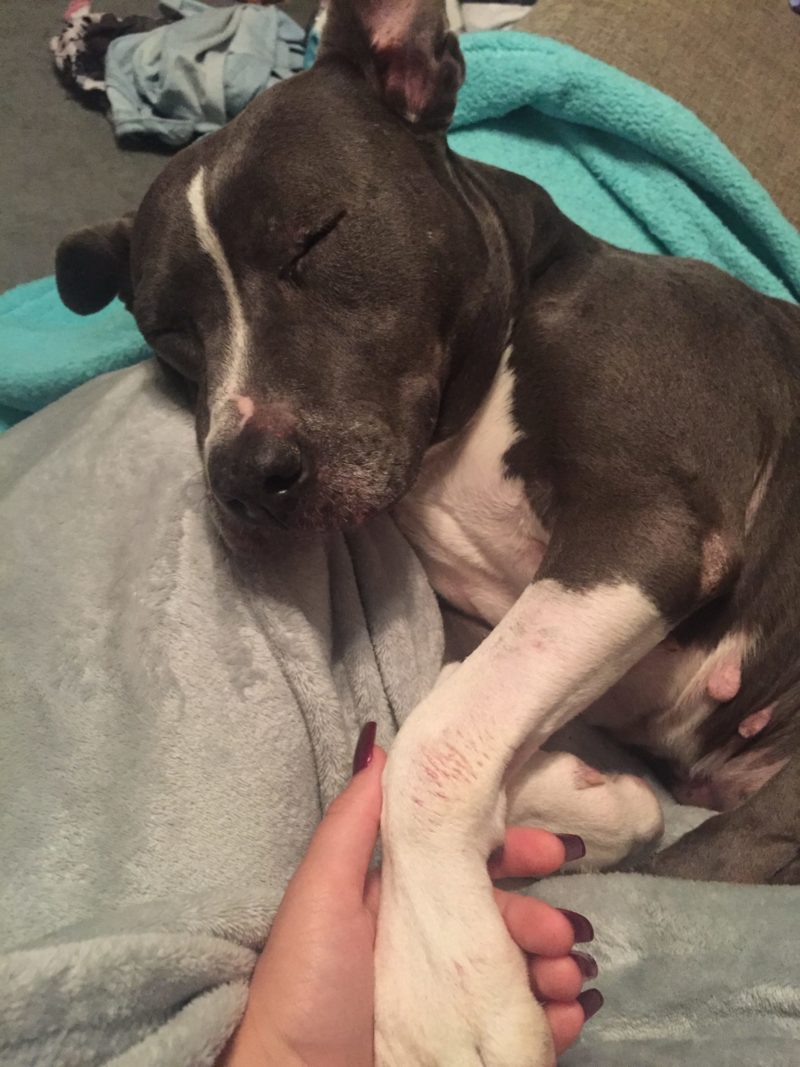 A thoughtful reflection on pit bulls by our very own (uh-mazing) Intern, Alicia Mercado. Read, reflect, and share.

When I visited the shelter, I had a different dog in mind. I knew I wanted a pit bull, which proved to be fairly easy, as all but seven dogs in the entire shelter (of about 40) met that requirement. Serena, whom I had picked from the website, was a gorgeous red with broad shoulders and a big smile. She was a stereotypical pit bull in appearance, the kind that people told you to watch out for when you were crossing the street. The only issue was my mother. Not crazy about dogs in general, my mother is afraid of big dogs. I did not end up adopting Serena; I had known my mother would reject it immediately if I had tried to introduce her to Serena, so when I arrived at the shelter I decided to walk around the entire facility once.

Luna was labeled a pit bull terrier, with a skinnier head, far less muscle mass, and she only weighed 45 pounds, ten more than my childhood dachshund mix. She was a senior dog, too arthritic to jump or run. My mother refused to stand in the room when I met Luna for the first time. She still tells me she’s afraid of her, two years later. The day I adopted Luna, I had a volunteer meeting at my local church where I shared pictures of my gorgeous new dog with everyone there. One woman in particular shared a grueling story about pit bull violence, and told me I ‘had better watch that dog around my young nephew.’ Luna loves kids.

I have always felt strongly about destigmatizing pits. As a dog lover from a young age, I never understood how an entire categorization (as pits are not technically a breed) could be labeled as bad or aggressive. This was only strengthened when I saw the reactions people had to Luna. My mother would have rejected Serena based on her appearance alone. She still tells me how she worries that my dog, who cannot run and has never bitten, will someday snap and attack her. A woman whom I have known since childhood told me my dog might kill a child off of a single picture of my smiling senior dog. People with small dogs often turn around when it seems we might cross paths on a walk, and people tell their children not to pet her, even after I tell them that it’s perfectly okay. These are regular occurrences in life with a pittie.

Pit bulls face a paradoxical cycle of prejudice. There is mass overcrowding in shelters. Few pits are spayed or neutered leading to an overpopulation. Pit bulls, labeled the most ‘violent,’ are also the most abused, the most neglected, the least likely to be adopted, and the most euthanized. Fear can lead to neglect or abuse, which can lead to aggression, and in turn more fear. Pit bulls are stigmatized as aggressive, but I have yet to meet one who was not incredibly sweet. There is a fear that can only be countered with understanding, an understanding of how to act around unfamiliar dogs, an understanding of the bases of aggression, an understanding that ‘pit bull’ is not synonymous with ‘dangerous.’

I have met countless individuals who are afraid of Luna. Some had specific reasons, but most did not. I have been to places where my dog was ‘illegal’ because she is a pit. I have been told my dog is not allowed in public areas because children were present. I have always been proud to have my sweet girl with me, though. I try to introduce her to people who are afraid of pit bulls so they can see that she can be a pit bull and docile and friendly at the same time. I try to ensure that children can pet her if they want to. Pit bulls have an extremely damaged reputation, one which several other breeds have had before them, and one which other dogs will surely have after. It begins at the roots of society, however, and any steps taken to combat these prejudices are productive and necessary. I invite you, as you move forward to consider your own biases and the places from which they stem. If you’re a pittie lover like me, I invite you to consider the ways in which we can work together to destigmatize and protect our sweet dogs. At the most basic level, loving one pit can lead to a lifelong impact.

Previous When a Rescue Group or Shelter Claims it’s “No Kill,” What Does That Actually Mean? The Answer, it Turns Out, is Complicated.
Next Meet ARDC Intern Kelsey Marks